Interview and portratit by Judith Carnaby 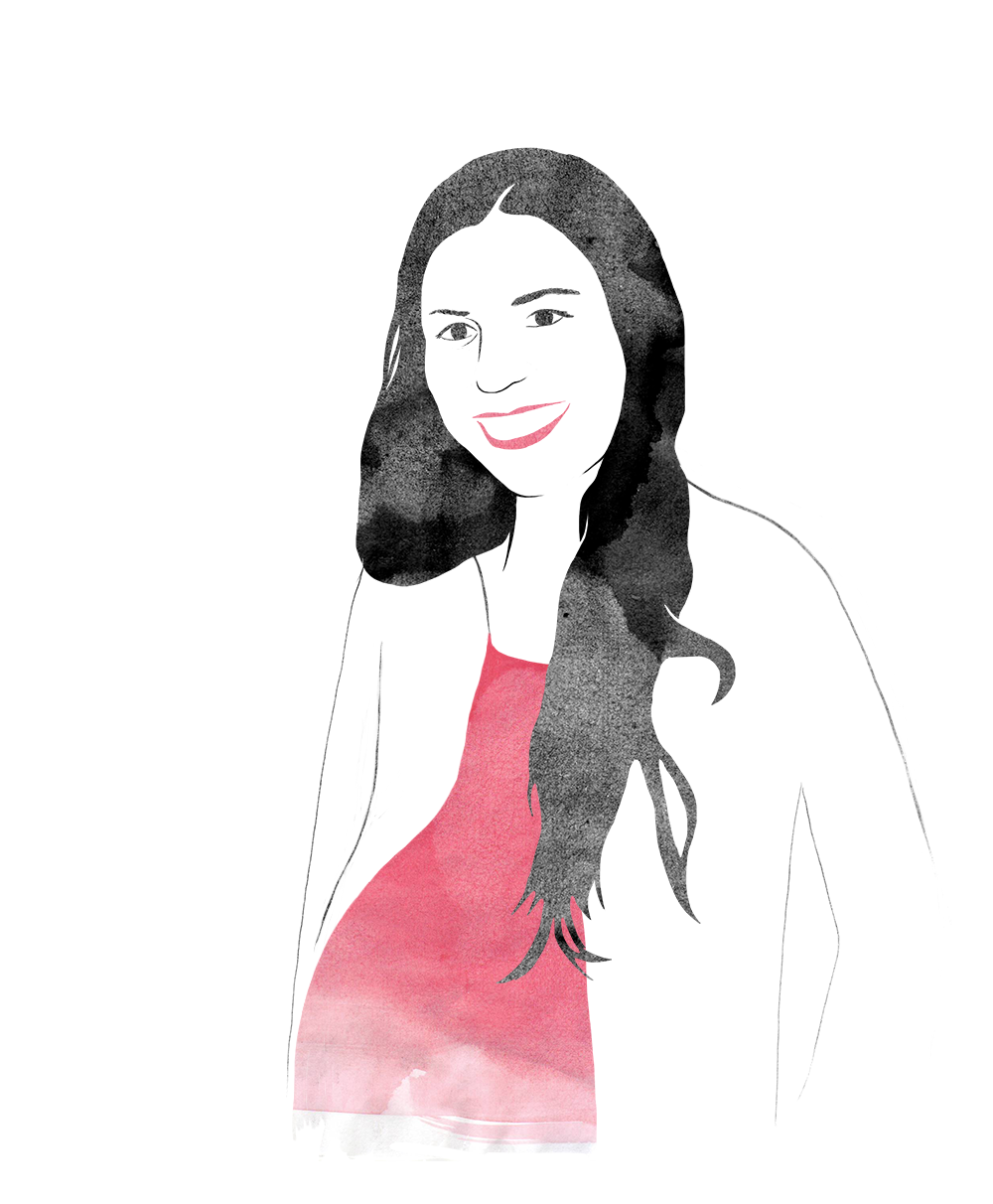 Chimène Henriquez is a French illustrator and graphic designer who has been residing in Cologne for the last few years. Educated in Paris and with family in France and Chile, talking to Chimène is an opportunity to reflect on the strength of illustration as a career for working internationally.

Chimène has been working freelance for the last 7 years and since moving to Cologne has developed a book project with a friend in Chile, as well as maintained her connections with France through commercial work and a long-term collaborative project with a close friend and fellow artist. In participating in this festival Chimène is exhibiting both her own work, and a number of paintings that are a result of that artistic collaboration, in Germany for the first time. Forging connections as an immigrant is a daunting task but Chimène is excited to now be working in a studio with other local artists, and thinking about new exhibitions and projects she could develop in Cologne in the future. 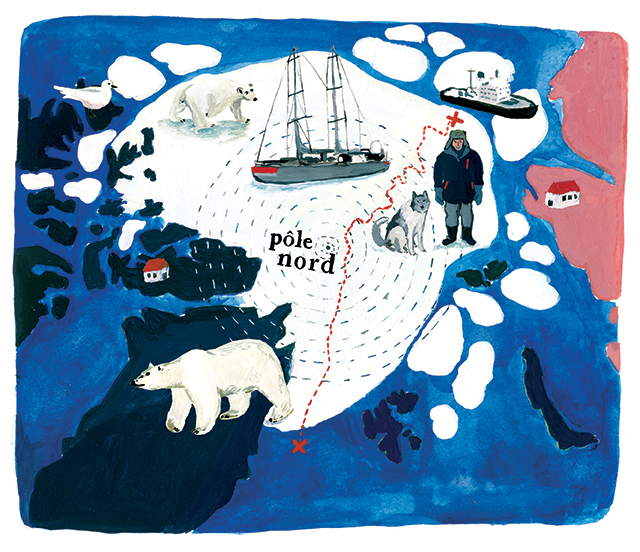 Illustration by Chimène Henriquez for the Tara Junior journal, a children’s science magazine

Judith Carnaby: When did you move to Germany? How has working as freelancer in Cologne developed for you? Has it been a challenge?

Chimène Henriquez: I moved here 3 years ago and yes it has been a challenge because I didn’t know anybody! I worked a lot with people in France for the two first years. I didn’t want to lose my contacts there, so I tried to go there very often. In a way it was good but in another way I didn’t really develop as much here in the beginning. But I have had a studio in Cologne for the last year and a half and decided to focus on developing my work and contacts here. I don’t want to lose my relationship to France but for the last year I have been working with clients here. I have been doing mainly in graphic design jobs – I haven’t done any illustration work with German clients – but I live here so it would be nice to work with people here.

Your illustration work has a lovely painterly nature, with gentle, almost impressionist brush-strokes. Do you do a lot of painting and working by hand?

Yes, when I work the first steps are always by hand. Sometimes I draw by hand, and then I do the colour with the computer, but also I do a lot of painting and then I use the computer only for cleaning up the images. It is not like I want to only do painting or only hand drawn work but I feel more comfortable working by hand. 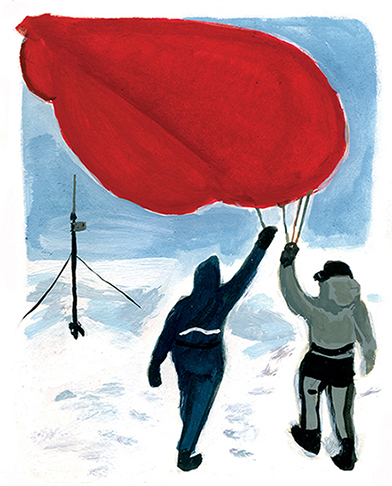 Illustration by Chimène Henriquez for the Tara Junior journal, a children’s science magazine

What is the sort of work that you like doing with illustration? Do you like editorial or work for magazines, or do you do work for advertising?

I wanted to say I would like to do everything, but actually I haven’t done advertising and I am not very interested in it. But I like the idea that illustration can be everywhere. For example I am currently working on a children’s book, but I would also like to work for magazines and other platforms. I worked with a graphic designer who asked me to do drawings for a restaurant. It didn’t work out at the end, but I thought it was really interesting to do a project like that because I like to see illustrations everywhere.

What inspires you with your illustration – when you are in your studio and can daydream and work artistically away from the stress of deadlines?

Well I like projects that have something to do with ecology and nature, or animals, and also food! For example the children’s book I mentioned – it was my idea and I just began working on it because I like interesting projects. With this project I wanted to do something that had a relationship with Chile, which is the country my parents are from and where I lived for 5 years. I thought it was a pity that I didn’t have more of a relationship with Chile and I also wanted to do a book where the children could learn something. I met an old friend who works for an NGO for the protection of whales, and we started talking about this and decided to work together. She is writing the story and I am making the illustrations. That is an example of what I like to do. 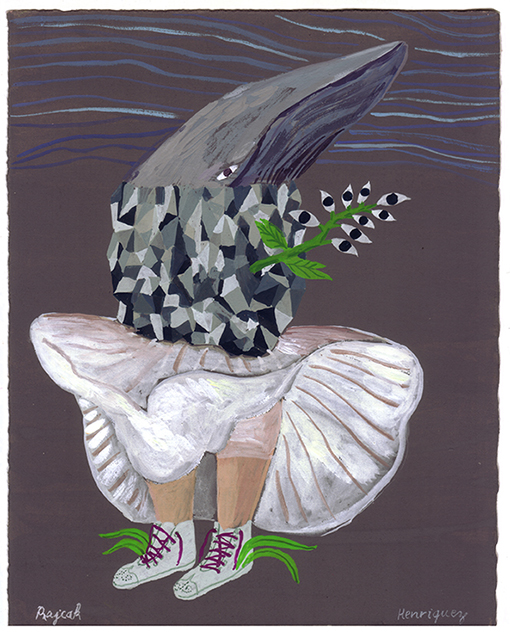 Continuing with this idea of collaboration, some of the work you are showing in ILLU14 is a collaboration with a fellow illustrator in France. Can you please describe that project to me?

‘Les Exquis’ is a collaboration that is based on the Surrealist technique cadavre exquis (exquisite corpse), which is really a kind of game. I started the project together with Hélène Rajcak, who also an illustrator, maybe 10 or 15 years ago. We began the project when we studying engraving together and it was always something like a parallel work; she had her work, I had my work, but we always kept doing this project when we met. For this exhibition I am showing the last series. We always make characters, and because we are not living together I begin the image, or she begins the image and we send it to each other. So for one image, I draw the head and then I send it to her, hiding the head so she can’t see what I have done, and she continues the drawing by doing the first part of the body, and then she sends it to me and I do the second part of the body, and I send it to her and she does the feet. Then we are finished doing the drawing and we discover the image as whole!

We made a book from our first series. We sent the images to three writers, and they imagined a story for each character. They created a name and a story and what the characters represent, and the characters become almost like little gods. The idea was to make an illustration but in another way: the writers illustrate our images. And we are continuing the series and have an exhibition once a year where we show the work. 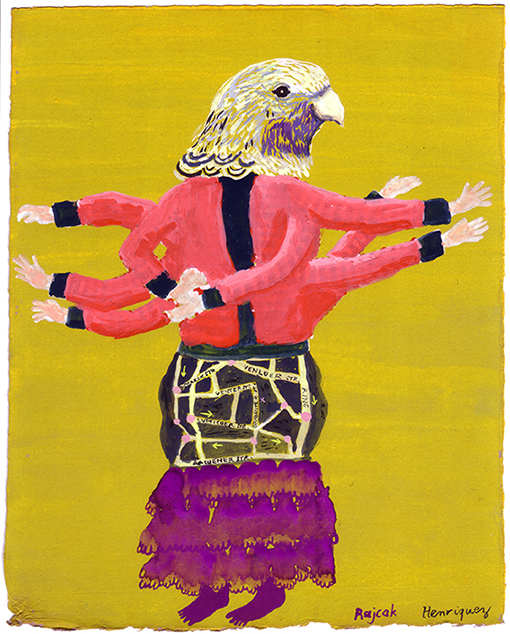 What does it mean for you to be showing as part of this festival?

What would you like to see develop here in Cologne for illustrators?

I think it would be great if there were more places where we could see illustration, but that I think is in general, not only in Cologne or in Germany, I think in France too. I think would be great if this festival would be every year but I am sure it is a lot of work and may not be possible. It is because of the festival 2 years ago that I met the people I am sharing my studio with now.

It was a bit of a surprise for me when I arrived in Cologne because what I miss are libraries or shops where you can find illustrated books, and not just for children. I really feel here it is difficult to find drawing books for adults, or special editions, or graphic novels or fanzines. When I am in Paris I always go to the libraries to see these works and publications and it is a bit of a pity here, I would really like to see that develop. 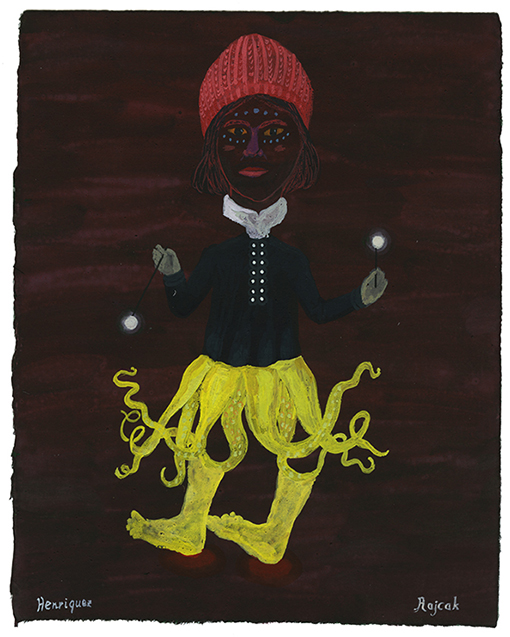 Thanks Chimène! To see more of Chimène’s work see her website.