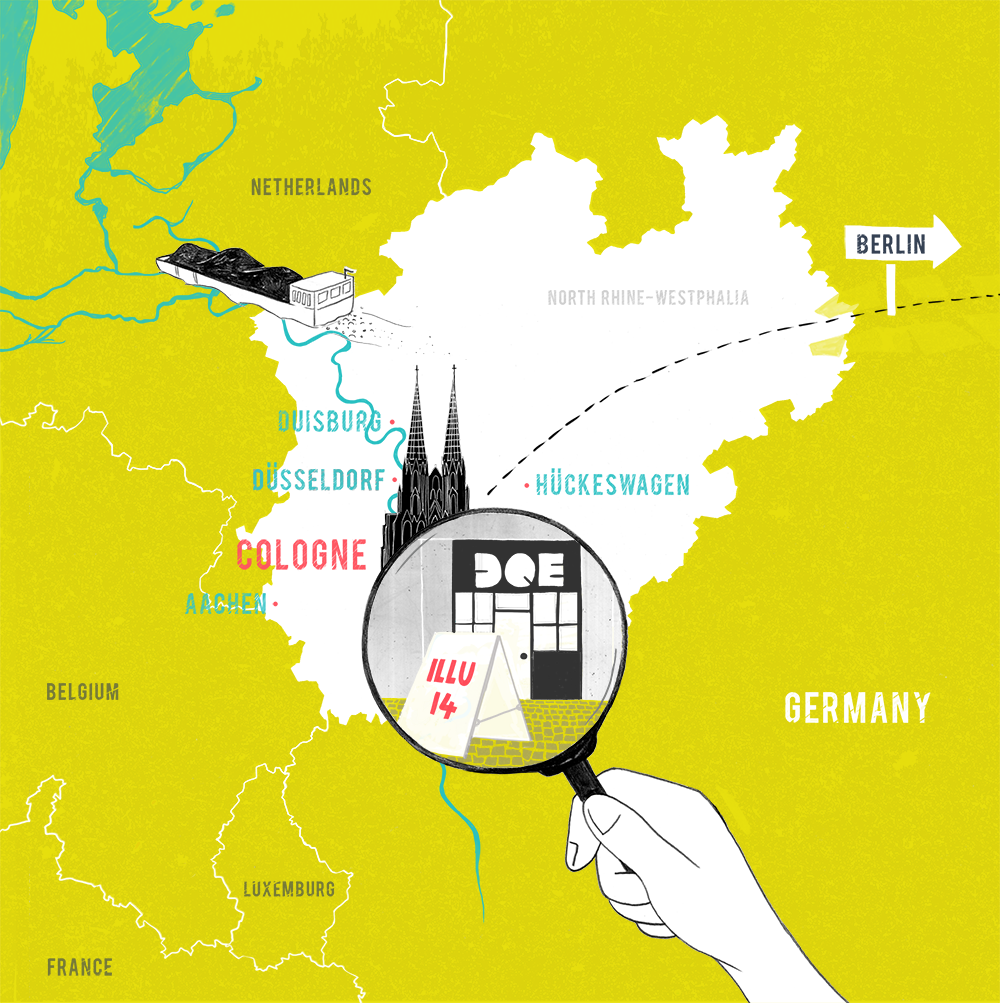 In early April I sped across Germany to the ILLU14 Illustratoren Festival in Cologne, excited to explore the illustration scene of North Rhine-Westphalia. The festival was organised by illustrators for illustrators, bringing together 51 artists from throughout the state in a rare opportunity to exhibit their work on a large scale. Brilliant flashes of yellow pierced my eyes as the train raced past fields of blooming rapeseed that lined the way to Cologne. As the train finally slowed, the famous Dom came into view, towering majestically over the banks of the Rhine as long barges laden with glistening coal mountains cruised along the river. Heading west of the city centre to the former industrial area of Ehrenfeld, the evening‘s warm spring air wafted me through the doors to the ILLU14 vernissage.

Bubbling excitement filled the brightly lit Design Quartier Ehrenfeld exhibition hall as the participants were congratulated by friends and family and soothed their opening-night jitters with a glass of champagne. A former warehouse, the high white-painted brick walls were covered with illustrations, while food carts and heavily laden ‘ILLU-Basar‘ tables lined the way to the crowded exhibition spaces erected in the back two-thirds of the hall. Many illustrators stationed themselves by their displays and spoke with passers-by about their work, and the chatter from hundreds of voices almost drowned out the screeches of the busy coffee machine. Visitors perused the piles of colourful books, postcards, prints and zines for sale at the bazaar or talked with the illustrators who were taking their turn behind the Tisch. On the simple stage, festival organisers gripped the handmade plywood podium with nervous hands. With a heart-felt welcome and thanks to the participants and sponsors, the exhibition was officially opened and the weekend-long public program of workshops, talks, and exhibition tours kicked off. 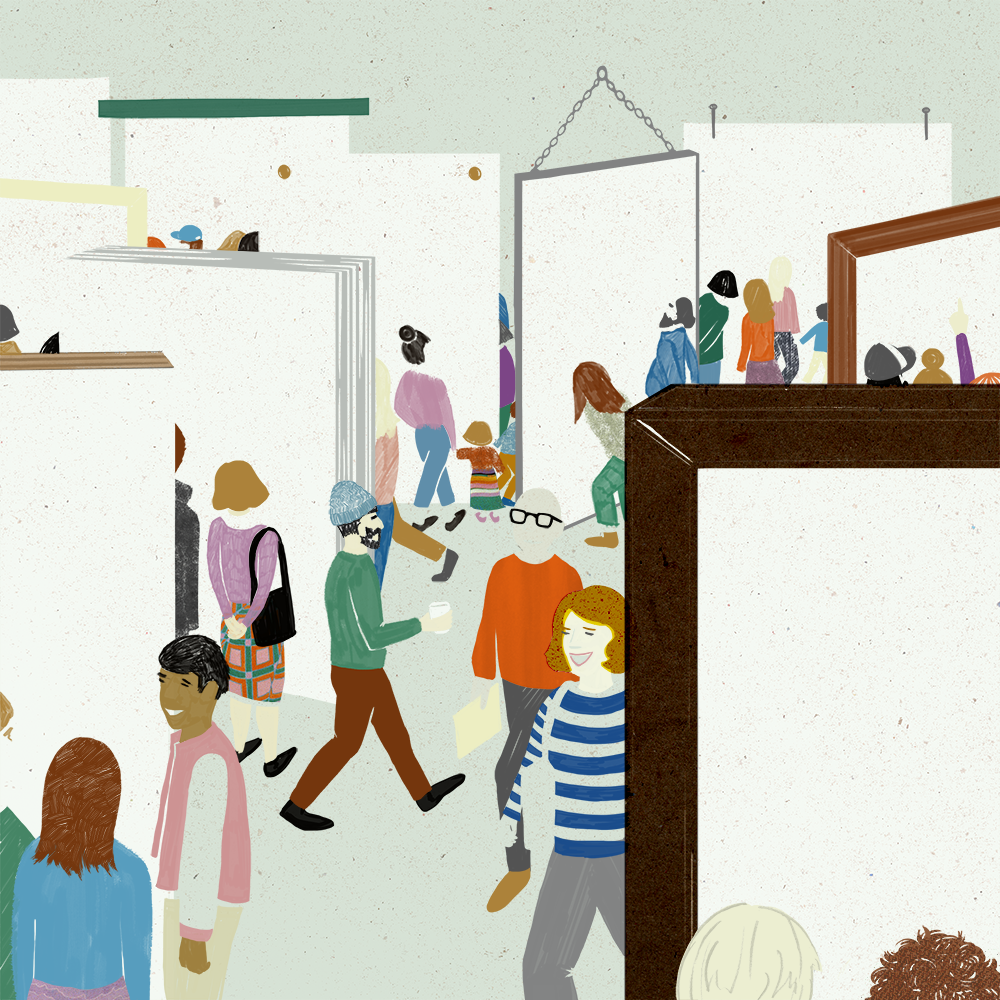 The theme of ILLU14 was ‘Illustration: the balancing act between art and life’, and as a whole was a warm, open and engaging festival. As well as important lens for the public to view illustration, it was an excellent opportunity for participants to meet fellow illustrators, art directors, publishers and others in the wider visual arts industry.

The exhibiting artists were selected from a list of applicants, and the judges were clearly interested in representing the diverse contexts and styles in which illustrators work. There were examples of editorial illustration for magazines and newspapers; crisp digital works that had been carefully printed; woodcuts and etchings; loose, rough sketches; comics; children’s book illustration; portraiture; as well as sketchbooks, publications, self-published books and a hanging mobile. For many participants it was the first public presentation of their work in an exhibition setting and the distinct displays reflected their creative approaches in representing themselves. Stand-out works included the beautifully executed and charming paintings by Katrin Stangl (who’s bold children’s book Stark Wie Ein Bär will be reviewed at a later date); the scratchy, messy and darkly ominous pencil drawings of Anna Gemmeke; Peter Pichler‘s inky portraits; Anna Katharina Jansen‘s topsy-turvy picture book; and the ‘Les Exquis‘ collaborative Surrealist paintings by Chimène Henriquez and Hélène Rajcak.

While the variety of work was impressive, the exhibition also showed the difficulties that illustrators can face when presenting their commercial work as ‘art’. Most illustrators presented some exploratory or self-directed work, but in trying to give an overview of their practice many exhibitors took their commissioned work out of context, framed it nicely and displayed it as a stand-alone work of art. Editorial illustration in particular is hard to adequately critique without the contextual surroundings, such as a heading or the accompanying article. One illustrator solved the problem for her work by placing full newspaper pages in her space to be picked up and leafed through, but for many others, presenting illustrations out of context unfairly reduced the images to be judged solely on aesthetics, not allowing for a meaningful reading of their work and reinforcing the unfair perception of illustration as a purely decorative form of art.

Most of the artists were present for the whole weekend, and many, alongside other industry professionals, were part of the public program – presenting their work, hosting workshops for children, or giving guided tours. While perhaps demanding for them, being visible is one of the best things about a festival like ILLU14. Meeting the participants in their exhibition spaces, or at the coffee cart, meant visitors felt able to ask questions about the illustrator’s work or techniques without feeling intimidated and for illustrators the talks were an opportunity to learn from each other.

Main guest speaker Felix Scheinberger gave quite a comprehensive presentation of the development of his practice as well as a brief overview of a number of how-to books that he has published. Based in Berlin, Felix is an established and successful illustrator and a professor at the University of Applied Sciences in Münster. His strategy for earning consistent money as a freelancer – working in a mix of quick turn-around editorial illustration and slow turn-around book illustration – was a useful topic for emerging illustrators. Clearly a practised public speaker, Felix was friendly, honest about the challenges in working as an illustrator and keen to stand up for illustration as a profession.

Not such a practised public speaker but charming nonetheless was Cologne-based illustrator and designer Sarah von der Heide, who talked about her popular Tumblr blog Draw Me The News. Started in 2012, Draw Me The News was a platform for Sarah to develop her illustration skills and techniques and to force herself to create work on a weekly deadline. Sarah detailed the important role that social media sites such as Instagram and Twitter played in creating an audience for the blog. Sarah’s ongoing project is a good example of how creating a frame for your work – in her case a blog with a simple focus but an ever-changing variety of content – can create room for experimentation that is important for developing your style and identity as an illustrator alongside commissioned work. At the end of her talk Sarah launched her first Draw Me The News book, compiled of her drawings from 2013, and printed just in time to be put out on the bazaar.

Given the theme of the festival it would have been good to see a talk by gallery director or curator as part of the public program. It would also have been useful to open up discussion of funding opportunities in North Rhine-Westphalia as sponsorship seemed to play a large role in getting the festival off the ground. Hopefully the connections made at the festival will develop into ongoing collaboration and more local events organised together.

This review is part of the ILLU14 Cologne special. Read the rest here!

Check out the ILLU14 website for more information, as well as to see more about the participating illustrators and speakers.

Also of interest could be the website from the festival in 2012.