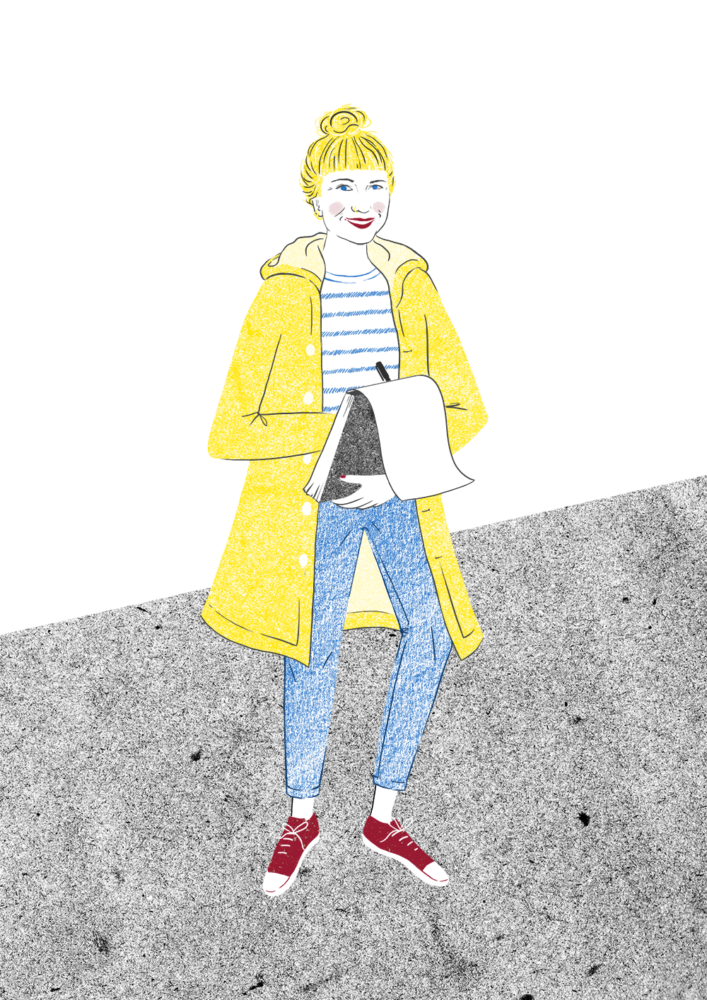 Interview and Portrait by Judith Carnaby

I first met illustrator Jayde Perkin among the whispers of leafy trees on a balmy evening at Prinzessinnengarten in Kreuzberg. It was one of the Illustrators Illustrated ‘Drawn Together’ meet-up nights and as we drew together under the coloured lights we chatted about the trials and triumphs of working as an illustrator. Now living back in the UK, Jayde is continuing to develop her illustration practice and documenting her life in small ‘zines and comics. Here she gives us some insight into her work, both playfully personal and professionally playful. 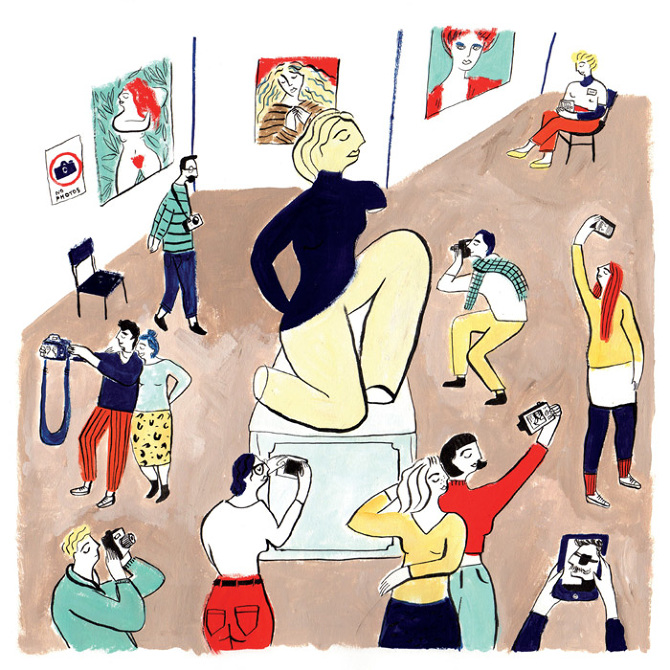 Illustrators Illustrated: Hi Jayde! Can you give me a bit of info about your background? Did you study, and when did you start illustrating professionally?

Jayde Perkin: I grew up in a seaside town in the South West of England, went to school, then another school, then college, then another college. I studied illustration at University West of England in Bristol, and as soon as I graduated I was lucky enough to move into a big communal studio space immediately, which was amazing. I guess it was here where I started illustration professionally, whilst juggling various part time jobs, but sharing a studio space with other creative people really motivated me. Two years after graduating, my partner David [illustrator David J. McMillan] and I moved over to Berlin, and it was here where I took that inevitably scary step to being ‘full-time’ freelance, which was a struggle at times, but taking risks is the fun bit! We spent a lovely year in Berlin. I’ve recently moved back to the UK, but it’s certainly not off the cards to move back at some point… I think my heart is still very much in Deutschland.

I notice that you do a lot of personal work: creating GIF illustrations, or publishing prints and ‘zines with Jazz Dad Books. What drives you, or what do you enjoy most, in your personal work?

I just love making. I will always try and find the time to be working on my own projects, alongside client work. My comics and ‘zines are very honest and personal, and I suppose they are an outlet for me to tell the stories which I want to tell; a bit like therapy really! But I do think taking the time to play and experiment with process and ideas is important for any creative person, and in turn will influence the next steps you take.

One of your most recent commissioned projects has been a ‘silent narrative’ of more than 30 illustrations that flow through the new Five Dials publication. How did you gain this commission? Did you have a close collaboration with the art directors and commissioners?

Visual Editions are a design studio who are based in London and focus on creating playful reading experiences. They got in touch with me for this project with Five Dials. They’re a small team, and an absolute pleasure to work with. We collaborated quite closely, especially myself and the designer Joseph, as many of the illustrations fit around the text, so it required some problem solving to get it spot-on.

A ‘silent narrative’ is quite an emotive and intriguing term. How did you approach the illustrations for this project? Did you respond to the texts that were already written, or did you develop a stand alone visual narrative that is in addition to the written content?

This was quite a tricky one, as the illustrations integrate so much with the text visually. However the project was to create a stand alone narrative, totally separate from the written content, so it works as its own story. I hadn’t actually tackled something in quite the same way before, but it was a fun challenge to answer a brief that didn’t relate to a text, but still had to accompany the text – it’s subtle and it works! Though I did sneak in a couple of little references, for example, there’s a beautiful essay about David Bowie (I’ve always been a huge fan) – so here my character is doing the ‘Heroes’ pose. 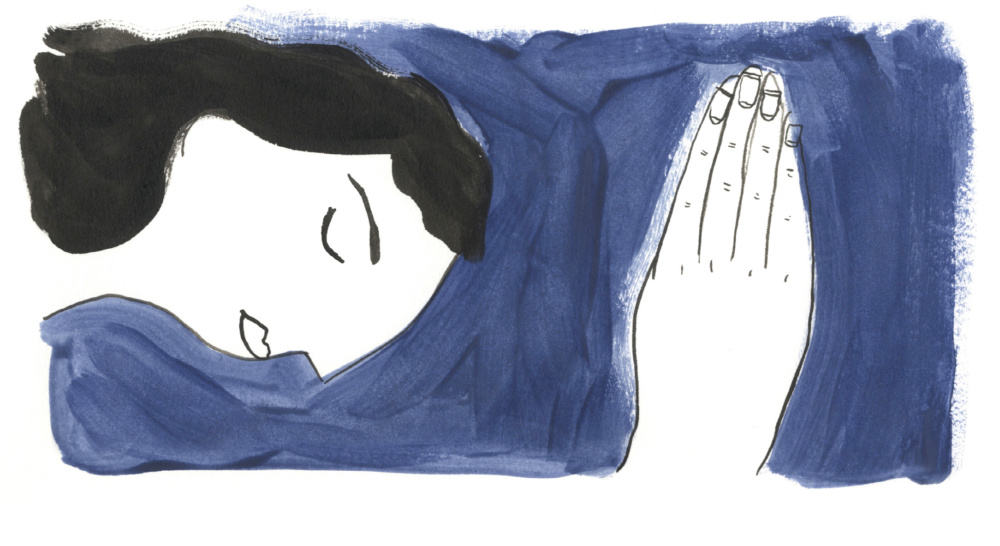 Many of your illustrations are bursting with colours, yet the artworks for Five Dials are very pared back, restricted to black lines and highlights of colour. Was this an interesting challenge?

It was a challenge but it was also refreshing. My most recent comic ‘Breathe In Deep’ was all in black and shades of blue, and this commission for Five Dials came along soon after I completed that, so I was still in ‘limited-colour-palette’ mode; it felt quite natural. It was a lot of illustrations, so the black ink meant I could focus on developing my character and the nice looseness of the brush marks.

Your illustrations are created with very tactile materials: rough pastels, intimately drawn lines in ink, or backgrounds of loose gouache. Why are you drawn to the materials you use? Do the materials influence the way you work?

In my sketchbook I often use pencil crayon or brush pen as they are more immediate (and they dry more quickly!) but my finished artwork is almost exclusively in gouache and Indian ink. I’ve always been influenced by painters, possibly more so than other illustrators, so painting feels very natural to me. I just love painting with a brush; the marks and textures that can be made are lovely surprises. And gouache has these bright, bold, opaque colours that I’ve been unable to achieve in the same way with watercolour or acrylic. 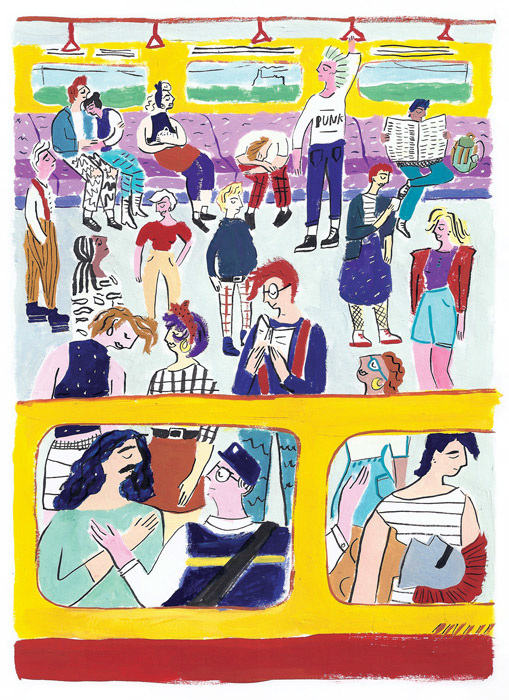 Illustration for the current issue of Das Magazin by Jayde Perkin

What tools or techniques can you share about your process? Is it all hand done or is there a computer involved?

The past few years has seen a change in the process of my work. I used to rely quite heavily on Photoshop to piece my paintings together, but I’ve been bringing it back to basics and I now paint everything in one layer. The computer comes in when it’s time to scan the illustration, and sometimes I’ll tweak it a little, but generally it’s all hand-rendered. Having a final, real and tangible ‘original’ painting at the end of a project is very satisfying.

I’m fascinated by people, and could sit and people-watch for hours. There isn’t a ‘right’ or ‘wrong’ way to draw people because everyone is different, and I love that. I find it hard to pin down exactly why it’s women in particular I love to illustrate… On a very trivial level, I feel the paintbrush lends itself to the female form; looser shapes, beautiful curves. On a personal level, as woman and feminist, who makes very personal work, it feels very natural for many of my characters to be female too. It’s quite instinctive really.

One of the personal GIF illustrations by Jayde Perkin

You are quite active on social media – using Instagram and tumblr to share your work. What is your approach to this? For example, do you find your social media presence helps in gaining commissions? Or are you more focused on connecting with other creatives and sharing your work with others?

It’s a bit of everything really. I love the immediacy of Instagram and Twitter, so I like to update these on a daily basis. Keeping up that communication with other illustrators and designers is really important, especially as I’m working from home at the moment, which isn’t a particularly sociable setting! Some of my clients follow me on social media, so I suppose it’s a way of implicitly saying ‘Hey, I’m still here!’. I find tumblr is a good half-way point between the ‘immediate’ Instagram/Twitter platforms and a ‘professional’ website. Though at times I can be a bit rubbish keeping up with my tumblr, I have a tendency queue up a bunch of things and then I forget to keep it going. I should probably go and update it now actually…. 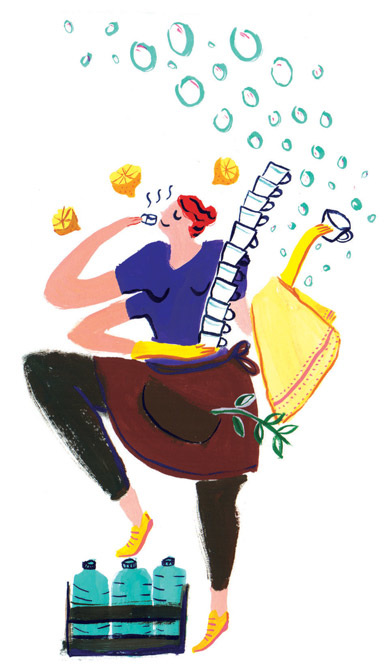 One of a series of illustrations accompanying an article about being a barista, for Standart Magazine, by Jayde Perkin 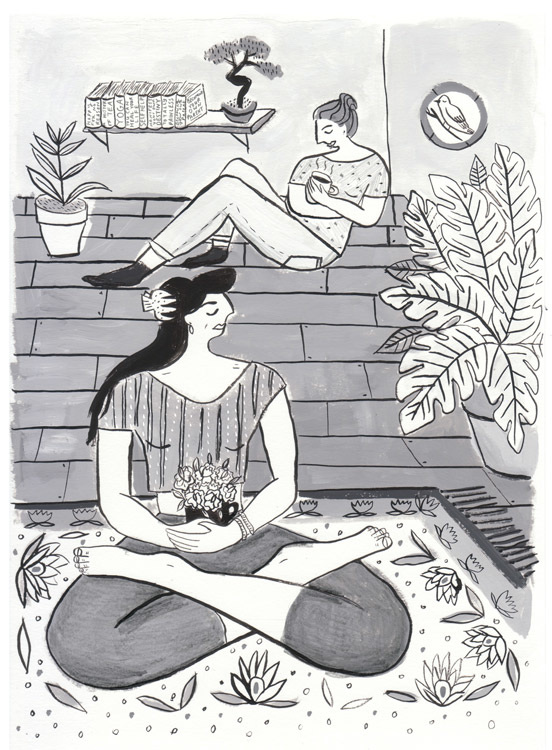 Illustration by Jayde Perkin for The Lifted Brow – which accompanies a short story called ‘Just Deep Breathing’ by Rosie Funder. 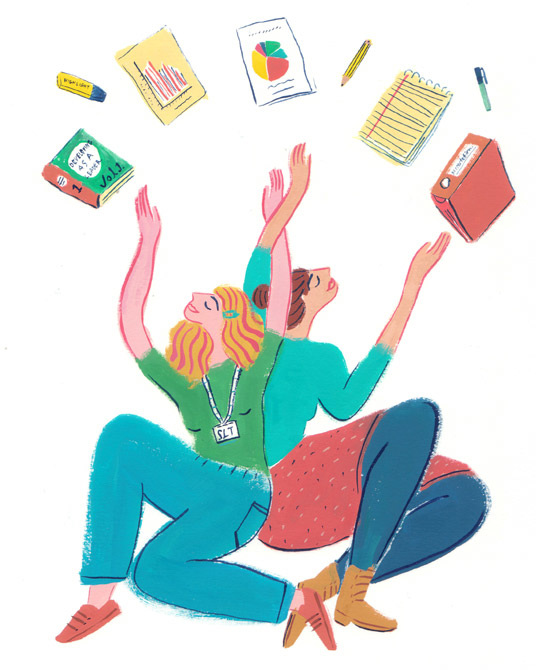 Illustration by Jayde Perkin for the June issue of Bulletin, a monthly magazine for The Royal College of Speech & Language Therapists. 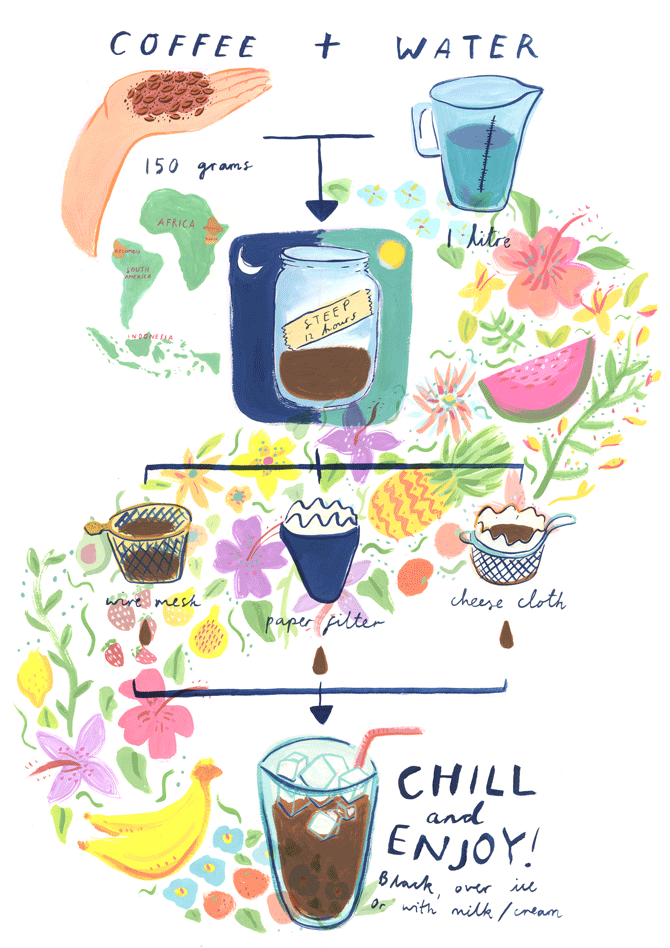 Thanks so much Jayde!