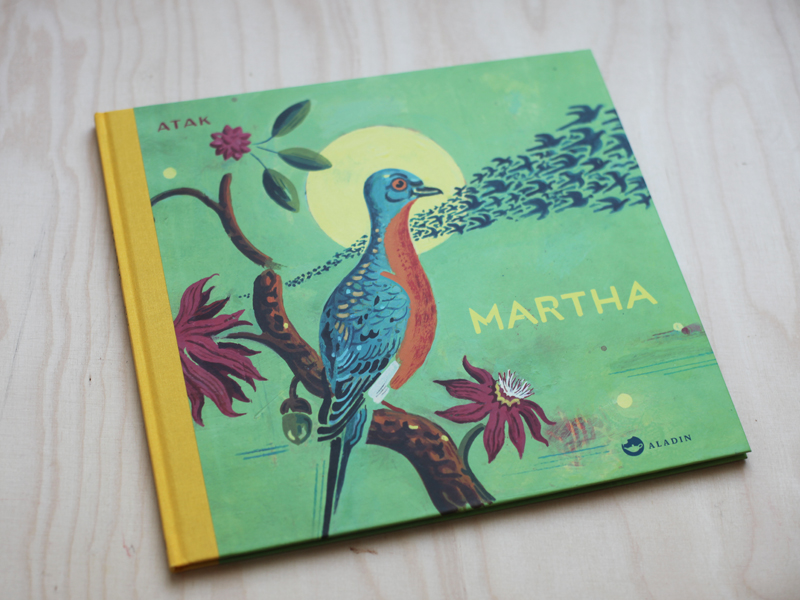 As a warming late-summer glow wrapped itself around an early September evening I cycled over to Berlin’s Natural History Museum for the launch of Martha, the new book by German illustrator ATAK. It was a full house, with guests squished in around the ankles of towering dinosaur skeletons and other fossilised remains of long-extinct creatures. As Atak started his talk, I noticed a surprising addition to the museum’s collection perched proudly at the front of the atrium: beside the speaker’s podium a slightly haphazard cardboard sculpture of a passenger pigeon exploded with vibrancy among the grey bones. If the museum space lent a certain reverent aura to the presentation, then the cardboard pigeon and its roughly painted plumage of bright blue and orange was a cheerfully whimsical response to the solemnity. Atak’s irreverent addition to the museum was a playful approach that is reflected in Martha, where his vivid artworks are a graphic reprieve to the sombre story.

Martha tells the tale of the extinction of North America’s native Passenger Pigeon – its shockingly rapid decline caused directly by humans – and is told from the perspective of ‘Martha’, the last of the species who died at the Cincinnati Zoo in 1914. The story starts with a feeling of greatness and awe, describing flocks of birds that were once so numerous that they would darken the skies for days, their beating wings as loud as motors. Martha goes on to describe the delight and interest in the species from the public and contemporary naturalists, but as the story develops, human interventions have devastating effects. The clearing of the birds’ natural habitat for farmland combines with the development of large scale commercialisation of hunting to decimate the pigeons. The story ends with the shooting of the continents’ last wild pigeons, and then finally the death of Martha, the endling, old and alone in her cage. 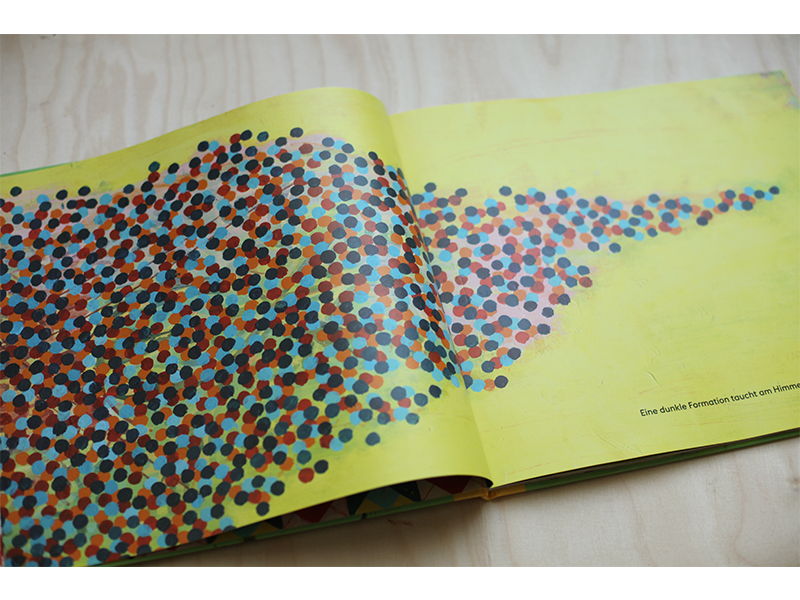 It is a forlorn tale but thankfully the grim subject matter is tempered by the vibrancy of the illustrations. Atak has created boisterous artworks, with riotous dashes and dabs of colour. Roughly-painted backgrounds, intense complementary colours, scratchy crayons, and jarring shifts in scale and perspective all combine to create surreal landscapes and swirling skies. A swarm of orange, red and blue dots opens the book: the flock of pigeons represented simply by the colour of their feathers. The book’s wide landscape format allows you to sink into the artworks, and wild strokes of paint push and pull you through the pages. One double-page illustration includes a stunning sweep of blue and orange paint to cleverly communicate the swooping flight of a large flock of pigeons. Another includes a tree teeming with birds, swamping the page, as the text reads, “It is a world made only of us pigeons.” 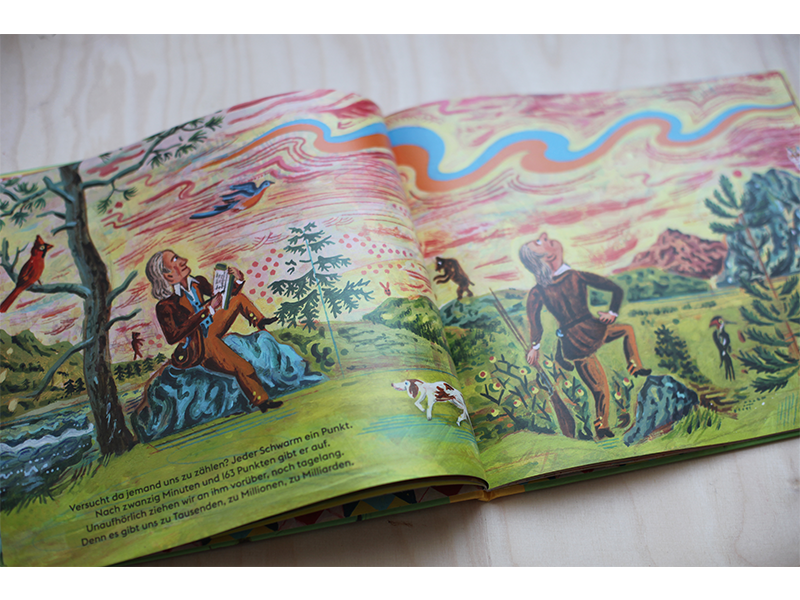 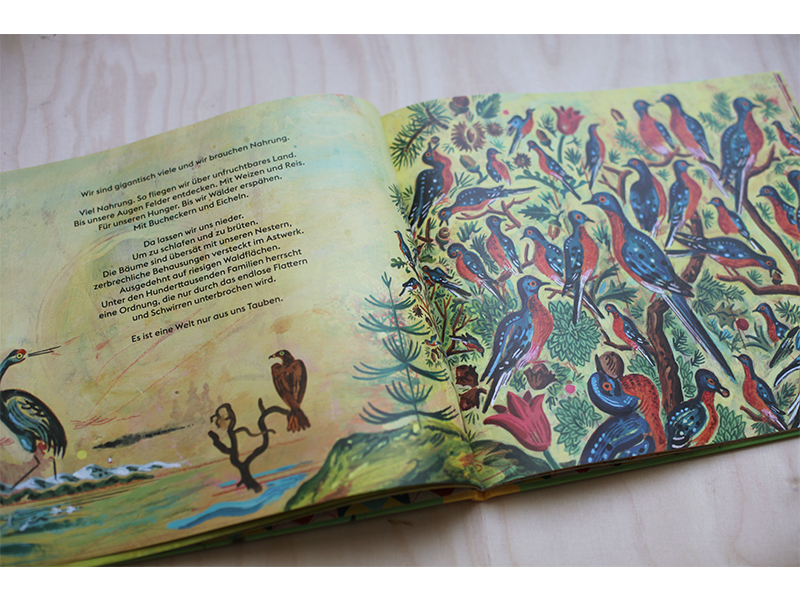 At the book’s launch, Atak spoke about the specific challenge of illustrating a children’s book: how to create artworks that maintain interest or allow new discoveries over numerous readings, when a parent has to read a child a book five times, ten times, one hundred times, often night after night. For kids there are tiny bears and other funny animals to hunt out, but perhaps with his adult readers in mind, he has included numerous playful references to historical works of art and characters from pop culture. Constantly referenced are the illustrations of birds by naturalist John James Audubon, whose immense work Birds of America is a defining visual document of our avian friends. Caspar David Friedrich’s The Wanderer looks out over one misty blue page, and the final page of the book quotes extensively from Hieronymous Bosch’s The Garden of Earthy Delights. Art historians have interpreted Bosch’s painting as a graphic warning on sin and life’s temptations, and in including that reference on the final page of Martha, ATAK seems to be reminding us that our natural world could very quickly become paradise lost. (In contrast, or to lighten the mood, you can also spot Popeye and Olive Oyl, Tintin and Snowy, or Butt-head and Homer Simpson.) 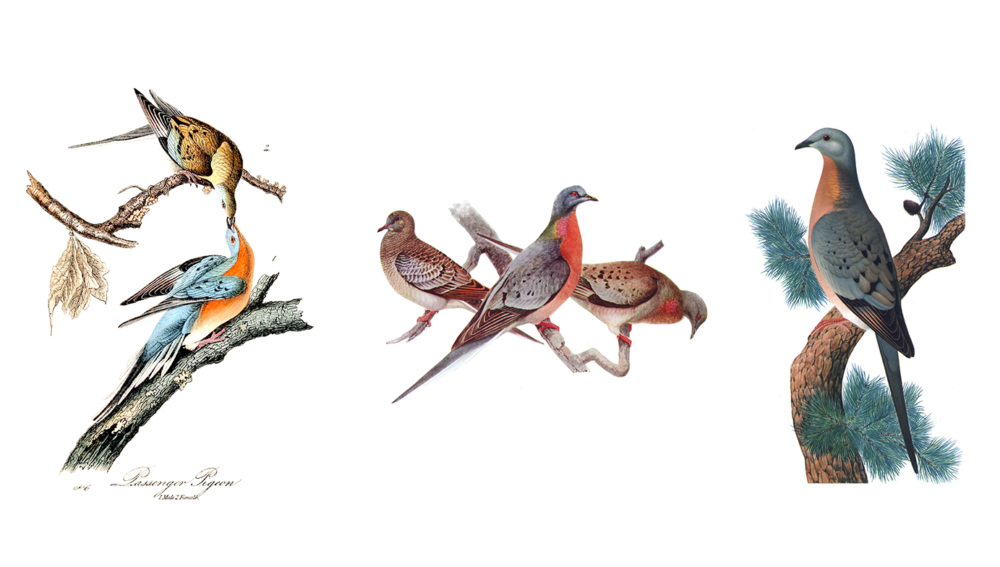 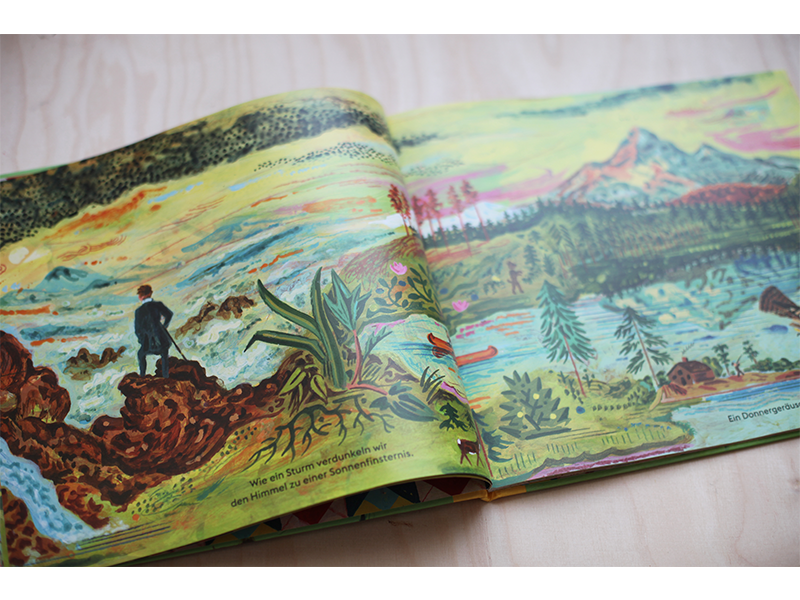 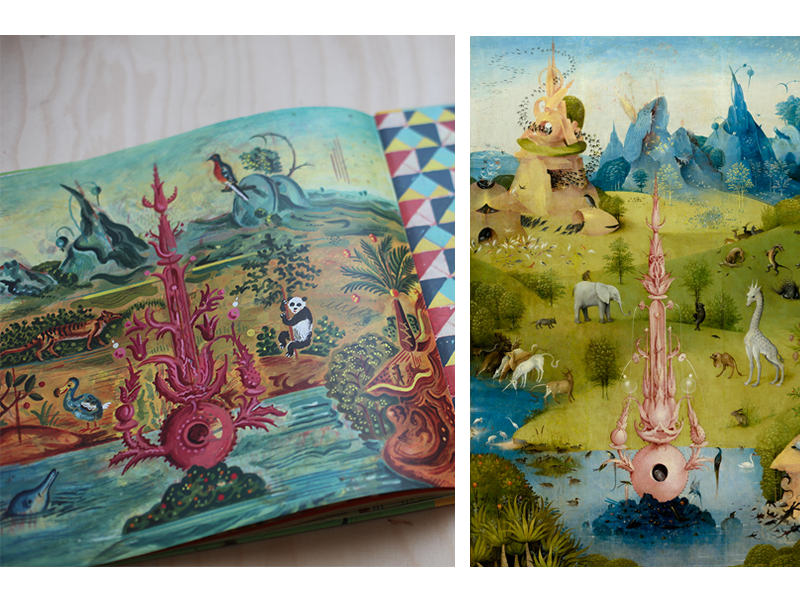 While all these references are certainly engaging for adults, there was an aspect that disappointed me, especially in the context of this being a children’s book. A couple of the artworks included quite insensitive racial depictions, which jolted me out of the artworks. With Atak’s numerous nods to pop culture, perhaps you could frame these characters as a reference to kitsch, or to imagery prevalent in the 1800s and early 1900s (contemporaneous to the extinction of the pigeon). But even if the characters were caricatures created with subversive or light-hearted intent, for children those concepts are meaningless – what they see is a reiteration of old imagery that reinforces dated racial stereotypes – and it surprised me these depictions would be thought suitable for inclusion in the illustrations. 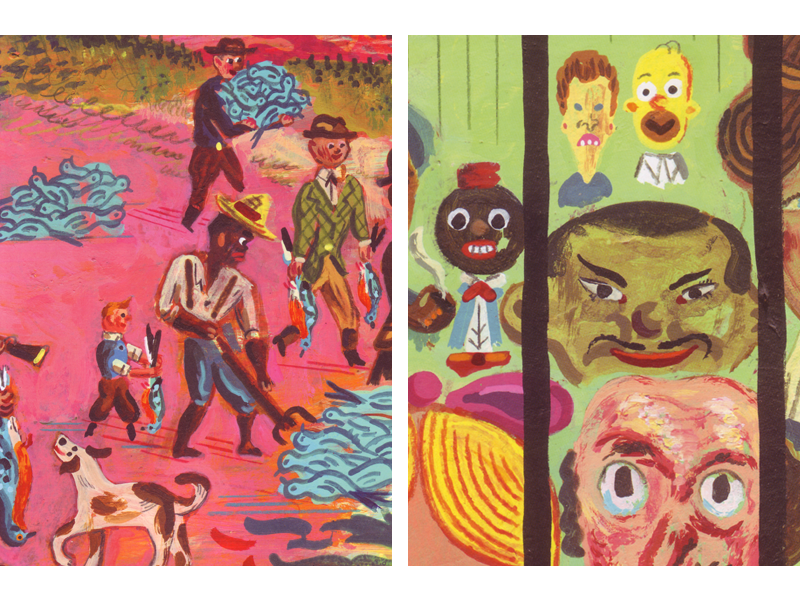 Details from Martha by Atak

As the book launch finished and the blue sky deepened, the audience left the museum and flocked around the corner to the Ministerium für Illustration for the vernissage of an exhibition of the original artworks for Martha. Someone brought the cardboard pigeon with us and reassembled in the gallery, with another cardboard pigeon flying festively in the window. The paintings were even more engrossing in real life: the colours, the textures, the funny animals and the awkward perspectives. There was lot to engage with, and the book is no different. As a story it feels like a timely cautionary tale, and with environmental awareness ever more important it is a great story to share and reflect on. As an adult reader there are many delightful references (no doubt I have missed some), and children will find little creatures and wild landscapes to explore night after night. 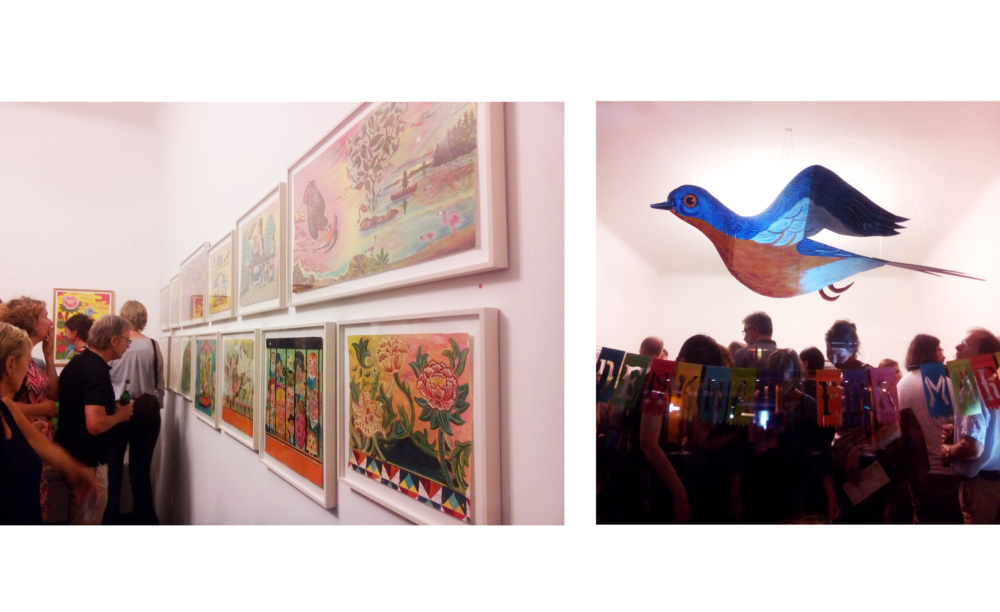 The exhibition Atak – Martha etait la is on at the Ministerium für Illustration in Berlin until 29. September.

About the author.
ATAK, whose real name is Hans-Georg Barber, studied visual communication at the Hochschule der Künste in Berlin. In 1989 he co-founded the avantgarde comics group and magazine Renate, and in 1992 his first graphic novel, Atak – The Flowers of Romance, was published. Atak lives in Berlin, and is a Professor of Illustration at the Burg Giebichenstein, Hochschule für Kunst und Design Halle.
fcatak.de