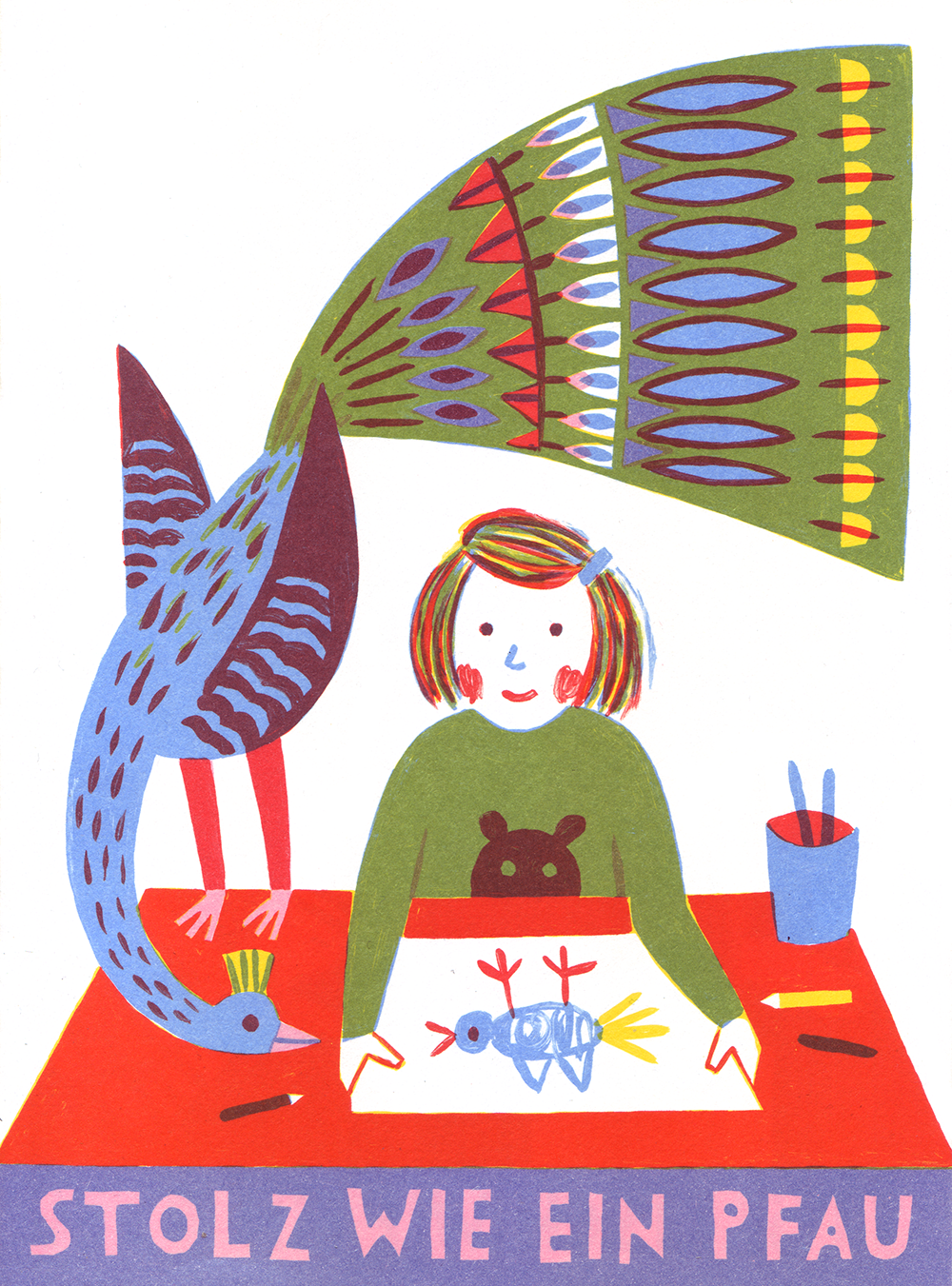 A child, splattered with mud and holding a rainbow coloured umbrella, gleefully stomps her gumboots through a patch of mud, egged on by two cheeky piglets. ‘Ahhhhhh’, I exclaim, ‘“Schmutzig wie ein Ferkel” means “dirty as a piglet”!’. Originally published in German, Stark Wie Ein Bär translates to Strong As A Bear, and is a delightful illustrated children’s book by Cologne-based Katrin Stangl. As a non-native German speaker, discovering Stark Wie Ein Bär was a great way to put myself in the place of a child, reading a word for the first time and experiencing how picture books teach children about the world. 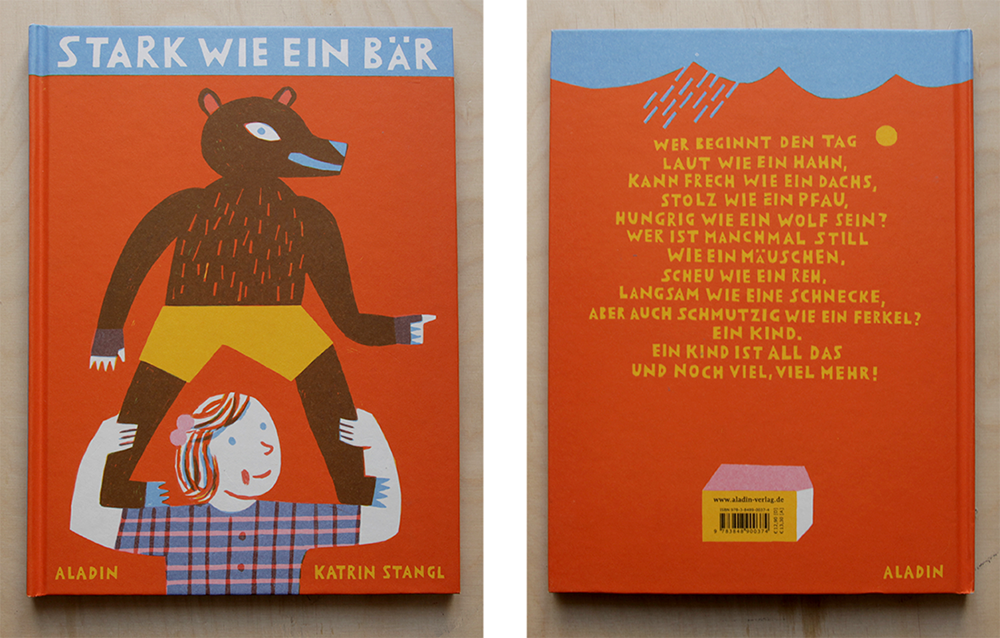 Stark Wie Ein Bär brings together well-known phrases about the traits of animals, with playful illustrations to explore the many sides of children. Stangl imaginatively interprets classic associations such as ‘free as a bird’, ‘hungry as a wolf’, or ‘slow as a snail’, incorporating the animals into a child’s daily activities in a way that engages a reader’s imagination. The children are central to the illustrations, encouraging the reader to see themselves in the images, recognising emotions or picturing themselves eating, playing or reading with the animals. A child and a fawn hesitantly peer out from behind an adult’s legs to illustrate the phrase Sheu wie ein Reh (shy as a deer). Placing the animals in a secondary role, almost as an invisible friend, is a smart visual and conceptual way to support and reinforce the feeling or the action of the child in the image. 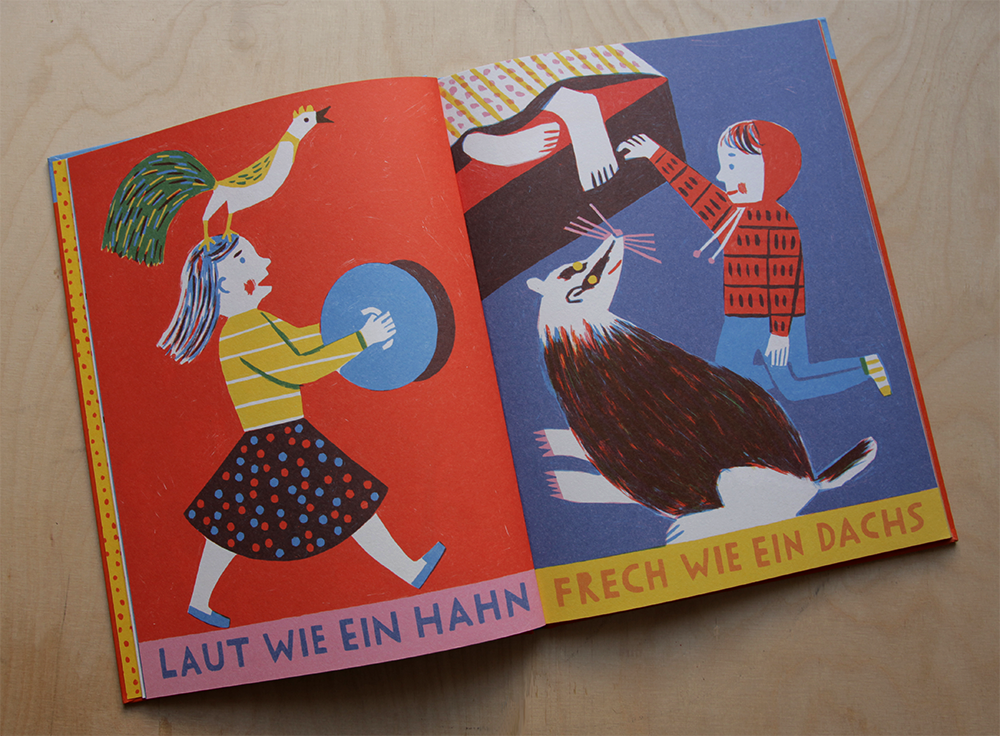 Printed on thick and creamy matte paper, the brightly coloured backgrounds and simple blocky characters combine to form a book that is luscious to the eye and to the touch. It is smartly designed and consists mainly of single-page images and text, carefully paired with the content and colours of the opposing page. Interspersed are three double-page-spreads, giving Stangl more room to devise enveloping scenes, such as a child whizzing down a slide when feeling Mutig wie ein Löwe (brave as a lion). The images and text separated by different background colours mean the reader can pour over the illustrations and then read the text, or visa versa, without either element taking away from the other. The style and simple layout resembles Seasons and People, two similarly engaging books of Blexbolex. 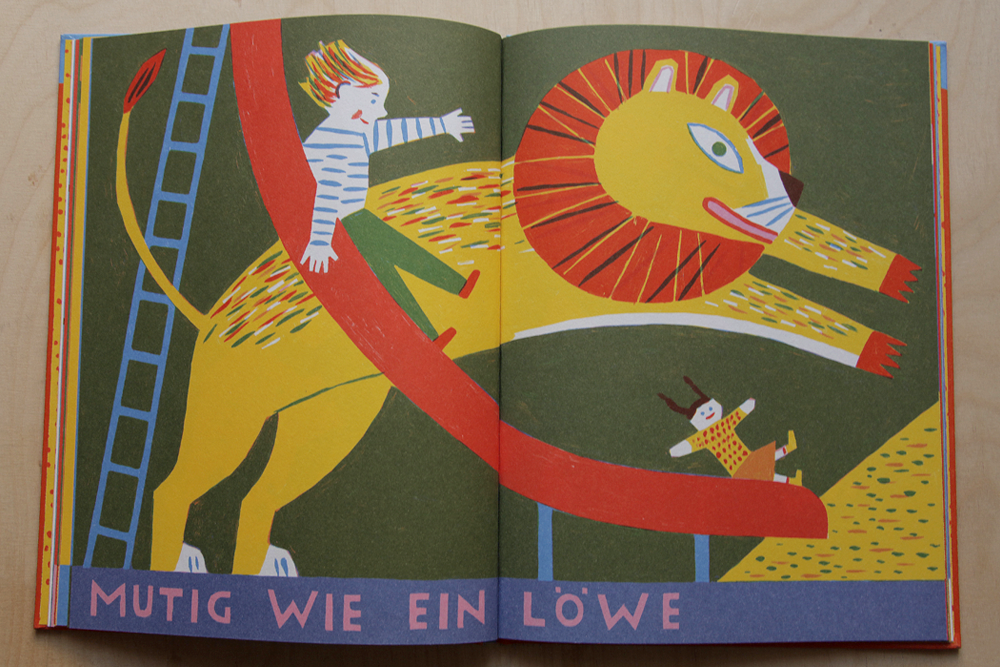 The blocky style of the illustrations is clear and fun, but it is the painterly nature of the images that makes them so engaging. Roughly formed shapes to indicate the bodies of children and animals are painted over with soft marks to convey features and form. Clothes are created through stripes and checks; the absence of lines creates the head of the Fuchs (fox). Particularly pleasing is the hair of the children, which appears to have been created using quick, almost messy strokes of the paintbrush. These sweeps of colour add a playfulness to the illustrations, giving richness to the figures and a sense of movement to the images. Delicate dabs of paint create dots of sand, subtle strokes convey the fur of a wolf. The details become special, to be noticed and to be treasured. 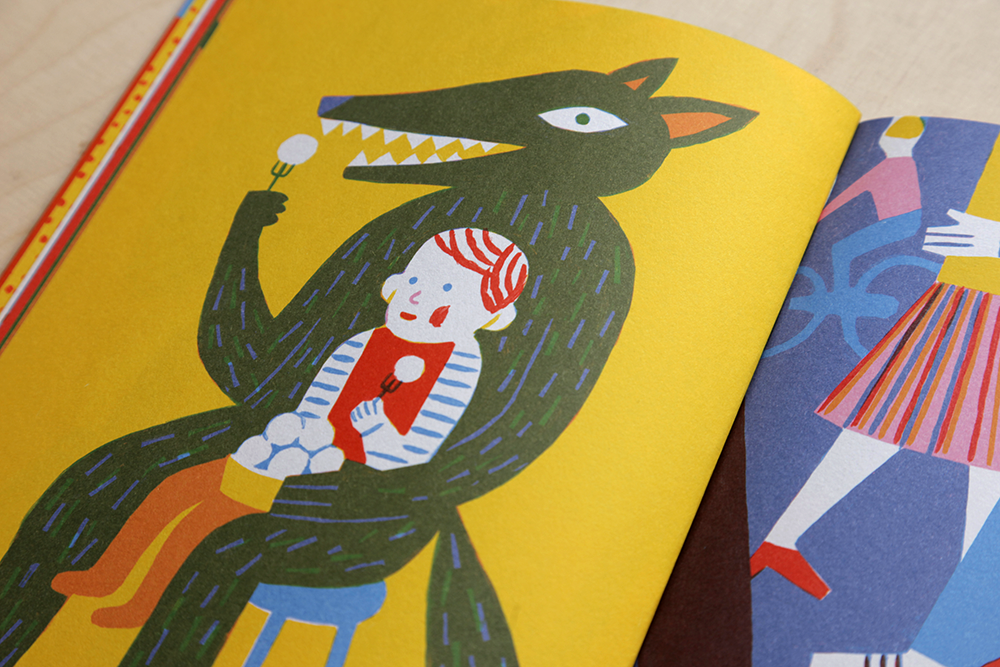 Turning the heavy pages and feeling the paper on your skin also adds richness to the book. The paper’s matte texture sucks in the ink, slightly softening and muting the printed colours, while its off-white colour creates contrast in the images. Balancing strong colours with white space is a basic technique of illustration, especially when playing with the background-foreground relationship. In this book the white of the paper has been used to make the children stand out from the colourful backgrounds, but there can be unintentional effects when using white to create focus in this way. When used to depict skin it can unnecessarily limit the diversity of representation of children and reinforces the false idea that white-coloured skin is ‘neutral’. This is an issue that illustrators working in a similar style should be aware of and challenge themselves with, especially when creating a book that seeks to relate to children universally.

Kicking over toys as stubbornly as a steer; presenting a drawing as proudly as a peacock; smashing saucepan lids together as loud as a hen. Even as an adult, Stangl’s clever visual associations give your imagination space to roam, and make you wonder just what animals are lurking in the shadows of your emotions. My friends would say I’m Geschwätzig wie ein Papagei (chatty as a parrot). 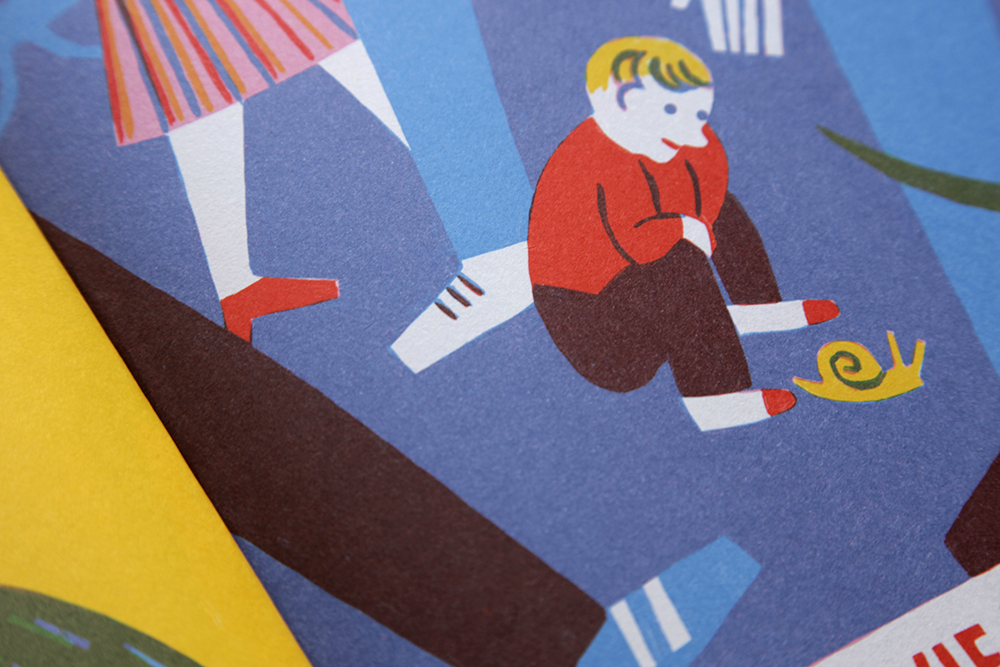 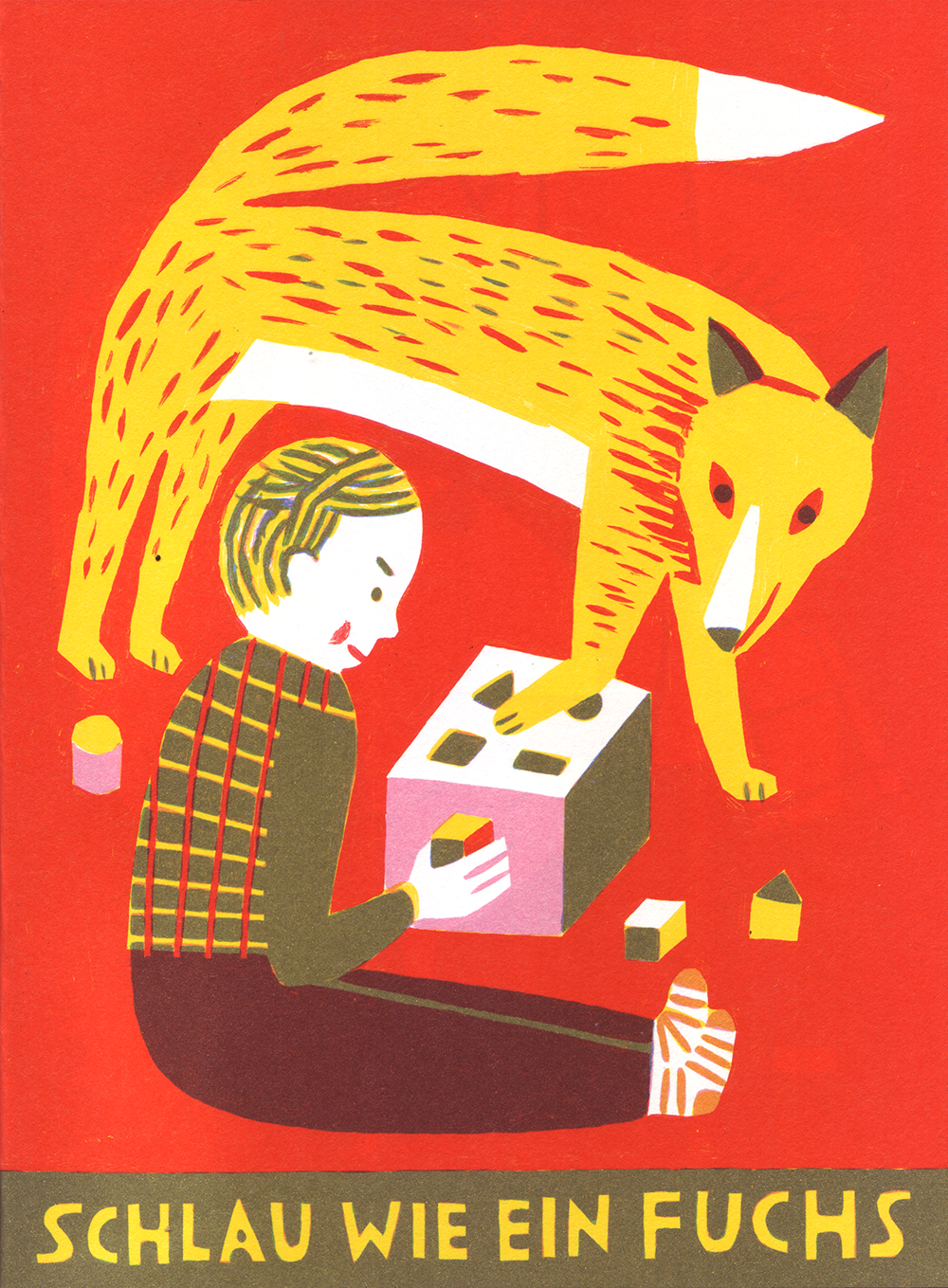 Stark Wie Ein Bär, by Katrin Stangl, was created as part of a scholarship from the Troisdorf Picturebook Museum.

This edition was published in 2013 by Aladin and supported by Carlsen Verlag, both based in Hamburg.