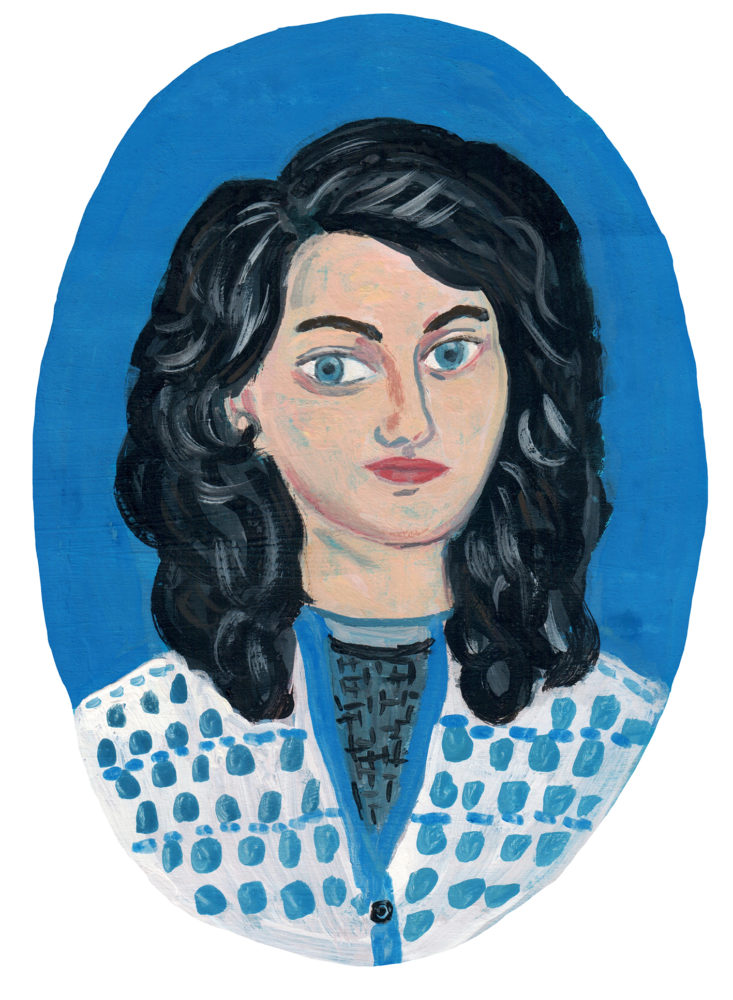 Portrait and interview by Chimène Henriquez

Sandrine Martin is a French illustrator living in Paris. She works in editorial Illustration, children’s illustration, and has also created numerous graphic novels, including ‘Nicky de Saint-Phalle: The Garden of Secrets’. Sandrine has worked for Le Monde, Libération, Psychologies Magazine, Bayard and Gallimard among others. She also regularly contributes short stories to the comic strip magazine Lapin by L’Association. Chimène Henriquez finds out more…

Chimène Henriquez: Hello Sandrine! Can you tell me about yourself, where you‘re from, and how you became an illustrator?
Sandrine Martin: I grew up in the suburbs of Paris, then moved to Paris and studied at l‘École des Arts Décoratifs, where I met some great people. I started working as professional illustrator in 2003. At the very beginning I also did some graphic design work for a magazine, but after a while I managed to dedicate myself to illustration. 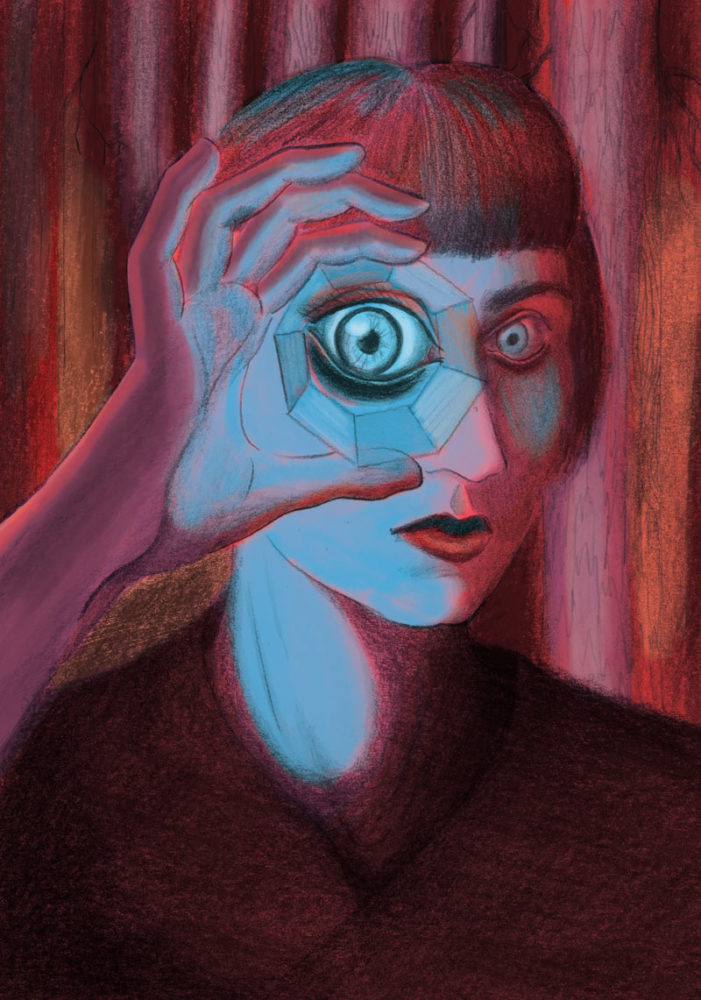 Detail from graphic novel about Sylvia Plath, by Sandrine Martin

In 2012 you published, ‘La Montagne de sucre’, a book with seventy white and black drawings without text. At that time you had already published two books (‘Le Souterrain’ and ‘L‘oeil lumineux’) and you were doing a lot of editorial illustrations as well. Can you tell us more about the creative process of this particular project?
Everything started in a sketchbook, where I eventually added more and more drawings. The characters were always different but there was a common story to tell – a love story, from the first encounter to the final separation. I did all the drawings first, then chose the order, and created the story.

What was your motivation to do drawings without texts?
When working on a graphic novel, you do not deeply involve yourself in individual drawings, and you usually repeat the same pictures a lot. Here, I could dedicate more time on each picture and work on details. This way, every scene convey more emotion.

How did you develop this project as a book?
Initially, I just wanted to do an exhibition. Then I met Jean-Christophe Menu from L‘Association, who was interested in making a book with my drawings. This came as a strong motivation for me to finish the project.

Since this was a very personal project, how was your collaboration with the editor?
Jean-Christophe Menu believed a lot in my drawings and gave me confidence. I was amazed by the way he treated the book as an object or design artefact, choosing everything very carefully. This way, it turned out to be a nicely designed book. 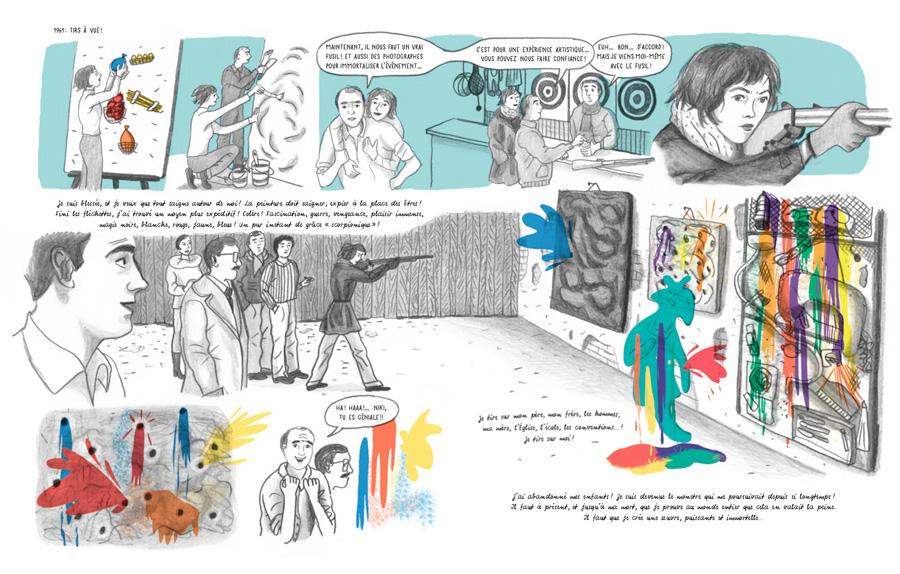 In 2014, you published, ‘Nicky de saint-Phalle’, with a script by Dominique Osuch. How does it change your approach of drawing when you are not the author of the story?
I think that this is a different kind of job, perhaps more playful because I did not have to write the text, which can be very difficult. In this case, I tried to depict what the author had in mind. On the other hand, when you write your own story, you have all the control and the satisfaction of realising your own project. However, I like both ways of working.

How about the way you integrated colours in this book? It is really interesting how the white/black drawings are combined with only a few touch of colours…
I had a discussion with my publisher at Casterman, Christine Cam. She was the one who had the idea to not put colour everywhere. Christine thought that it would be more interesting if colour only appears to express something symbolic or emotional in the story, or when we want to reinforce a particular feeling to emerge. It was very natural to do that, and I think it works very well.

Can you tell us more about your recent or ongoing projects?
I recently finished an adaptation of a novel by Pierre Péju, ‘Le Rire de l‘Ogre”, published by Casterman. This is the story of a French teenager discovering Germany in the Sixties, in a kind of heavy post-war atmosphere, and falling in love for the first time.
I also did a webcomic about the story of a pregnant Syrian refugee in Athens, which can be read on the website of ERCcOMICS. For this project, I collaborated with Vanessa Grotti, an Italian ethnologist, and her team, especially Cynthia Malakasis. The researchers study pregnant refugee women in Europe and how these women interact with midwives and gynaecologists in their hosting countries. The project was very interesting. I traveled to Athens and visited places like the care centre of the Doctors of the World, the Armutel centre, which an association helping refugee mothers and their babies, a refugee camp, etc. I am now working on an adaptation of this story. It will appear as a book in Spring 2020, published again by Casterman. 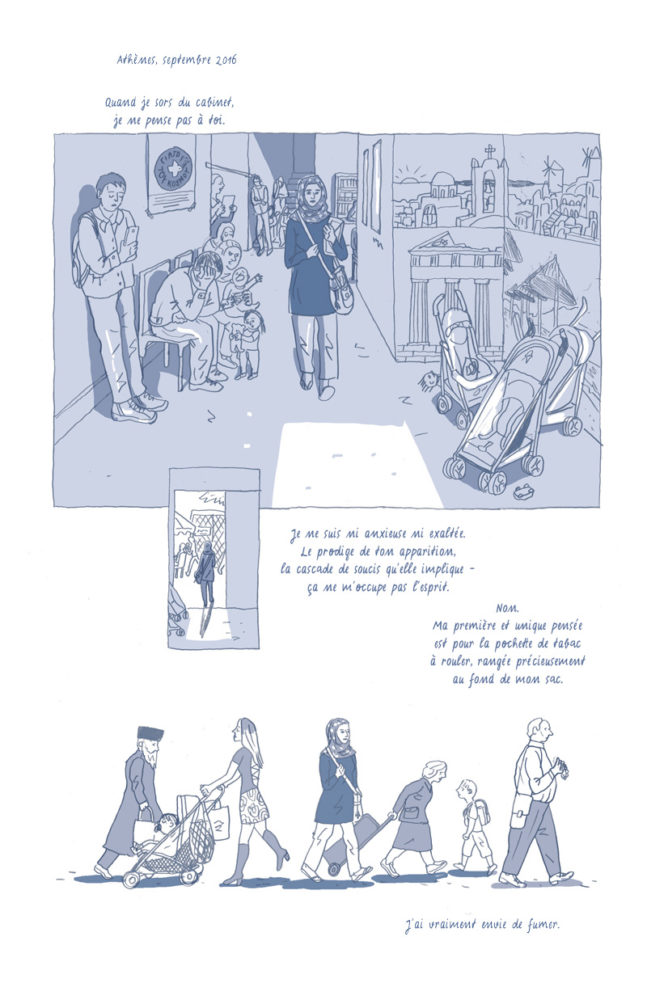 Detail from Expecting, by Sandrine Martin 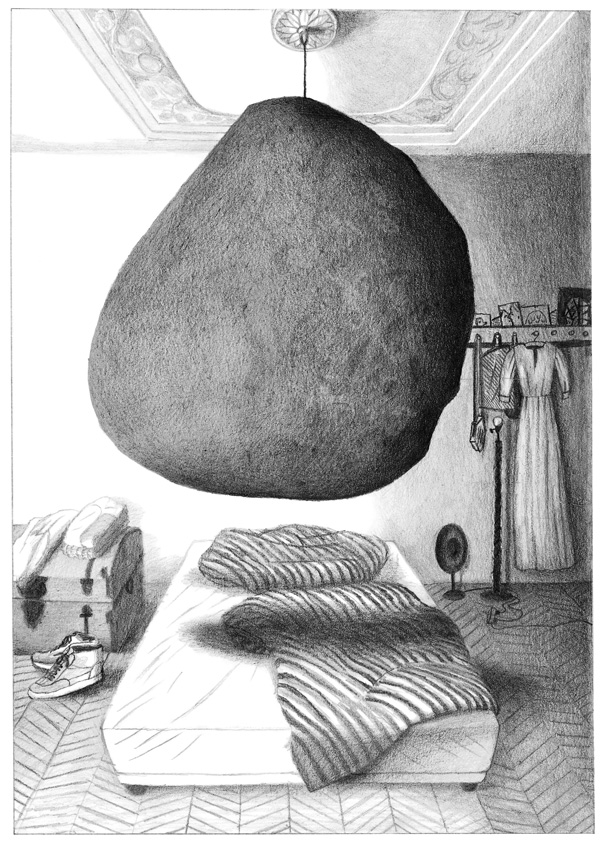